Ruby, a type of corundum, consists mainly of alumina (Al 2 O 3 ) and red from chromium (Cr). A natural chrome-free gemstone is a blue sapphire. 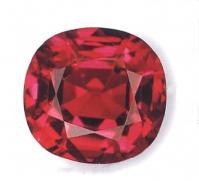 Since ancient times, ruby â€‹â€‹(RUBY) has always been a precious gem in the world. It is one of the twelve treasures that God has given to mankind. It has always been a collection of merchants and dignitaries. The high-end ruby â€‹â€‹is boring, and the other red minerals are incomparable with the natural beauty of the day, and the "bone blood" red and bright colors. In China, people pay attention to red fire, and red represents good luck. In Europe, in the royal wedding, ruby â€‹â€‹is still a witness to marriage. Named the July birthstone. The mineral name of ruby â€‹â€‹is corundum, the chemical formula is A1: 030, the so-called ruby â€‹â€‹or red corundum gemstone, which includes light red to deep red, all red-tone corundum gemstones.

The quality of ruby â€‹â€‹is mainly evaluated by color, clarity and cut. The colors are red, orange red, dark red and pink, of which pure red is the best. Clarity refers to the size, quantity, position, and contrast of the ruby â€‹â€‹in the ruby. The reduction is better, and the higher the flaw, the more the transparency and durability of the gem. Cutting is the requirement of ç¢ type, proportion, symmetry and degree of modification. The ç¢ type is the shape of the jewel to be cut. The proportion refers to the ratio of the waist width of the ç¢ type to the full depth. The general cut ratio is 60% - 80% is good. Symmetry is to see if the jewel waist is symmetrical, whether the apex is eccentric, and whether the table is tilted. The degree of modification is the uniformity of the faceted arrangement.

The English name for Ruby is Ruby, which is derived from the Latin Ruber, meaning red. The mineral name of ruby â€‹â€‹is corundum.

The chemical composition of ruby â€‹â€‹is aluminum oxide (Al2O3), which is red to pink due to the trace element chromium (Cr3+). It is a trigonal system. The crystal form is often in the form of a barrel, a short column, or a plate. The aggregates are mostly granular or dense blocks. Transparent to translucent, glass luster. The refractive index is 1.76-1.77, and the birefringence is 0.008-0.010. The dichroism is obvious and heterogeneous. Sometimes it has a special optical effect - the starlight effect, which reflects the fascinating six-shot starlight under the illumination of light, commonly known as the "six-way line." The hardness is 9, and the density is 3.95-4.10 g/cm 3 . No cleavage, crack development. Ruby emits red and dark red fluorescence under long- and short-wave ultraviolet radiation.

Among the ruby â€‹â€‹reds, the most valuable is the most intense color, known as the 'pigeon blood' gem, very expensive. This bright and intense color, which can be called the deep red color, reveals the true face of the ruby. Unfortunately, most rubies are light in color and have a powdery feel, so rubies with pigeon blood tones are more valuable. In addition, because the ruby â€‹â€‹is filled with strong anger and rich colors, former people think it is the embodiment of a dead bird, and it has an ardent illusion. The origin of natural rubies is sparsely populated, the quality of ruby â€‹â€‹is only produced in Myanmar, and the output is gradually decreasing. Now it can be said that almost the decline is exhausted, and the big stone no longer appears.

Evaluation and purchase of rubies. The primary evaluation and purchase factor for rubies is color, followed by weight, transparency and clarity. In general, the color is pure, the particles are large, transparent, with little or no inclusions and flaws, and the processing is fine. The proportioned faceted rubies of all parts are the best. Burmese rubies, mostly pigeon blood red, uniform color, high transparency, large grain, very few flaws and cracks. Sri Lanka ruby, light color, the main variety is star ruby. Thai sharp bamboo ruby, deep red, not too bright, relatively clean. Ruby is brittle, afraid of knocking, beating, and should be taken care of when wearing.